At Warner Vineyard grapes are hand picked from vines grown in decomposed granite soils which allow the vines to naturally manage their yield to ensure optimum fruit quality. Our fruit is keenly sought by renowned winemakers however we keep the best fruit for our own wines using our knowledge of our vineyard to select the best rows. Our aim is always to produce straight varietals, however in some years we take the opportunity to produce white blends of either Roussanne Marsanne or Marsanne Chardonnay. These wines are designed as ‘alternative’ wines and something where we can experiment and explore different approaches. 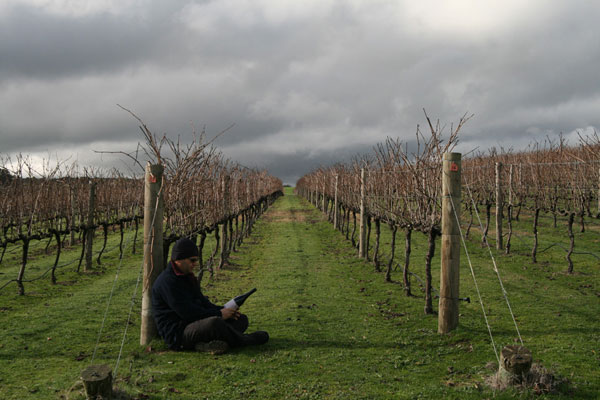 2019 Chardonnay represents the third vintage of our Chardonnay made from specially selected and managed rows of fruit from within the vineyard. Wine making was similar to the 2018 wines, with new oak from Tonnellerie Sirugue balancing the fruit profile and natural acidity we are now achieving. Using minimal intervention process of whole bunch pressing, and racking to a combination of mostly 2 and 3 year old oak and again using Indigenous yeasts for the fermentation.

This first release of straight Marsanne represents an achievement for Warner Vineyard.  Our aim is always to do single varietals, but sometimes the seasons dictate that it just isn't possible.  2018 presented perfect growing conditions for the Marsanne and so we finally managed to produce a truly limited release (less than 90 cases) Marsanne.  Get it before it's all gone.

2016 was a brilliant year for white wines from Warner Vineyard. On top of that we decided to only pick the very best rows and make a blend, with the aim of producing something similar to our acclaimed 2014 'RM". We think we actually eclipsed it. Beautiful bright golden colour, lots of stone fruit flavours, beautiful vanilla and a lovely toasty oak rich mouthfeel. This is easily one of our favourite wines yet produced.

2015 presented a season which allowed us to produce a single varietal Roussanne. Handpicked, whole bunch pressed, limited time on skins and racked with full solids into French oak of varying age and sizes including some new (Rousseau) oak. Like all Warner Vineyard wines this was with indigenous yeasts and left on lees until bottling in February 2016. This wine has been treated with minimal intervention including no filtering prior to bottling. This wine has a beautiful colour imparted from the skins and lees.

2017 Shiraz represents a continuation of our popular savory style of wine.  Pepper, spices and those yummy savory meat flavors are all there.  Its a popular wine, cool climate in style so not overpowering but with enough weight and body to satisfy you on even the coldest darkest winter nights.

2018 Marsanne87 Points
Read More
Deep yellow-gold colour, looking like a much older white wine. The bouquet is rich, ripe and evolved, with notes of mixed citrus peels and juices, some nutty barrel ferment overtones and a full-blown palate which is rich and almost opulent, finishing with drying tannins. There's a subtle note of citrus peel bitterness which helps cleanse the aftertaste. It's very forward.
Reviewed by Huon Hooke.
2018 Chardonnay92 Points
Read More
Light to mid-yellow colour, relatively forward for a 2018. The bouquet is overt and complex, rich and generous with toasty, cashew, smoky barrel and subtle creamy, buttery overtones. Some estery notes. A very good chardonnay; it has generous flavour and is traditional in the sense of full-flavoured, multi-layered character. It's also typical of the region.
Reviewed by Huon Hooke.
2015 Marsanne Chardonnay92 Points
Read More
Deep yellow colour, with a buttery overtone to the complex nutty and stone-fruit bouquet, which shows a trace of development. The palate is lighter and tighter than anticipated, with clean lines and appealing savoury dryness. There's a trace of bitter peel which enlivens the taste-buds at the finish. A very attractive dry white.
Reviewed by Huon Hooke.
2012 Chardonnay88 Points
Read More
Light to medium, bright yellow colour. Attractive yeasty and creamy lees aromas, youthful and fresh, then a soft, fruity palate with a lick of apparent sweetness. A fairly straightforward style, a more commercial caste of chardonnay. Well-made.
Reviewed by James Halliday.
2012 Chardonnay95 Points
Read More
Hand-picked, whole bunch-pressed (then the pressings returned); wild yeast-fermented and matured for 10 months in 1 and 2-year-old French oak. The first time part of the crop has been withheld from the queue of eager grape purchasers, and the complexity of the tapestry of flavours demonstrates why the demand is so strong.
Reviewed by James Halliday.
2012 Shiraz89 Points
Read More
Medium to deep red colour with a tinge of purple. The bouquet is peppery and just a trifle herbaceous, and it's a tad lean in the mouth. Good wine, in a light to medium-bodied style, but just on the shy side of full ripeness. Nice, though.
Reviewed by Huon Hooke.
2012 Shiraz94 Points
Read More
Slightly subdued colour is misleading, for the bouquet has an array of spice, cracked black pepper and plum fruit leading into an elegantly savoury, light to medium-bodied palate; looks over its shoulder to the Rhï¿½ne Valley, perhaps due to the whole bunch ferment of roughly half the wine (the other half destemmed).
Reviewed by James Halliday.
2013 Roussanne92 Points
Read More
Full yellow colour. The bouquet is very Rhone-ish, perhaps even viognier-like: spicy and apricot-like, the palate rich and deep with density and volume of flavour. It's rich and medium to full-bodied, with lychee flavours and soft, ample, near-dry finish. Spiced honey. Some warmth from alcohol.
Reviewed by Huon Hooke.
2013 Roussanne92 Points
Read More
Bunch-sorted, then whole bunch-pressed to French oak of various ages (some new) for wild fermentation, and kept on lees in that oak until bottled Feb '14. Bright straw-green, it is a potent and savoury wine, with some bitter aloe/almond kernel nuances. Will build even more with time.
Reviewed by James Halliday.
Read More Reviews on The Real Review
Read More Reviews on Wine Companion

2018 Chardonnay represents the second vintage of our Chardonnay’s made from specially selected and managed rows of fruit from within the vineyard.  Wine making was similar to the 2015 and 2016 wines, with slightly less new oak balancing the fruit profile and natural acidity achieved through lowering the yield.  Using minimal intervention process of whole bunch pressing, and racking to a combination of mostly 2 and 3 year old oak and again using Indigenous yeasts for the fermentation. Bottled in February 2019, this wine is now released for your enjoyment.

Made in a similar fashion to our acclaimed 2015 Chardonnay, the biggest difference this vintage received was the fact that we specifically targeted select rows of vines for the fruit production. We then used the same process of whole bunch pressing, and racking to a combination of 2 and 3 year old oak again using Indigenous yeasts for the fermentation and minimal intervention for 10 months, Bottled in November 2016, and aged for 18 months prior to release its ready for drinking now, or if you like cellar it and let it mature for a while.

This wine was made by pressing whole bunches and then combining with the pressings and racked to a combination of 1 and 2 year old French oak. Using indigenous yeasts for the fermentation and minimal intervention for 10 months, the resulting wine is true to the vineyard and eloquent winemaking style. Bottled in November 2015, and aged for 12 months prior to release its ready for drinking now, or if you like cellar it and let it mature for a while, you won’t be disappointed.

Consisting of two thirds Marsanne this wine was produced with similar methods to our straight our straight Roussanne. Handpicked, whole bunch pressed and racked with full solids into French oak of varying formats using indigenous yeasts and left on lees until bottling. The resulting wine shows the trademarks of the granite rich site with the softness and richness of the marsanne balancing the minerality of the chardonnay.

2014 was just ‘one of those years’. Two frost to kick off the season wiped out our Chardonnay and limited the yields of the Roussanne and Marsanne to such a degree that we decided to only pick the very best rows and make a blended wine. Treated with the same fine wine making techniques of all our wines, it has shown that you should never give up. The resulting wine has the richness of the “The Rest” Roussanne, great ‘mouth feel’, the toastiness from the oak and a beautiful colour.

The cold start to the 2014 vintage resulted in a slightly later than usual harvest, allowing the development of complex flavours balanced with ripeness. Taking carefully selected fruit from each of our shiraz vineyards indigenous yeasts were used on two parcels of fruit. As usual the fruit from our main shiraz block was divided between whole bunch (75%) and destemmed (25%) with the fruit from our second block fully destemmed. The resultant wine is close to 50:50 whole-bunch:destemmed. After twice daily pump over/aerations before tapering off to irregular punch downs this wine was pressed to a combination of new and aged French oak. Whilst in barrel MLF was undertaken and the wine was left on full lees for approx. 14 months before racking and bottling, unfiltered and unfined.

2013 will go down as one of the all time GREAT shiraz years across many regions of Australia and the Beechworth region will be no exception to this. There are very limited supplies left of this keenly sought after wine. It is drinking well know, however will love a little more time in the bottle and will be at its best in a couple of years (of course by then it will be all sold out).

The success of the 2012 Shiraz and 2012 Chardonnay gave us confidence to have a go at a Roussanne. Produced in very limited quantities (only 80 cases) this wine was met with excitement from consumers, particularly those who were familiar with wines produced by Giaconda from fruit grown in our vineyard in the past. The 2013 Roussanne was our fastest selling wine to date reflecting its quality.

Roussanne is a grape variety that not just anyone can get right. It takes careful management, a knowing wine maker and lots of patience. When you do get it right it is brilliant. Again we hand pick this fruit, rejecting any bunches that are not perfect. At the winery it is whole bunch pressed and racked with full solids into French oak of various ages, including some new oak, and varying formats. It was then fermented with indigenous yeasts and left on lees until bottling which occurred in February 2014. This wine is a great example of how Roussanne should be made. Enjoy it now or give it some time, at least a few years.

2012 marked our first year of producing wine under our own label. Keeping only 2 ton each of our chardonnay and shiraz we produced wines that we hoped reflected the vineyard and the season. They also helped set the direction of our own label wines and provided many customers access to wines from the Warner Vineyard at more affordable prices. The wines were well accepted and subsequently sold out.